When I was around eight years old, I was severely anemic and ended up in the hospital for a blood transfusion. Spending time on the charity ward at the height of racial segregation in the US south of the 1950s probably explains a lot about my subsequent development. Two memories stand out.

Every night when visiting hours ended and my mother disappeared, I worried that she was never coming back. We were poor. I was sickly. Who needed the extra burden?

Yet, miraculously, each night she returned, beautiful and faintly scented by Avon’s “To a Wild Rose.” Often she was accompanied by our minister, a deacon and his wife, and a pint of strawberry or butter pecan ice cream. After they left, I would roll over to face the wall, worry drawing me up like a fried pork rind.

One afternoon the orderlies wheeled in a bed and placed it next to mine. They said the occupant was a boy my age. I couldn’t judge for myself because, like a mummy, every inch of him was wrapped in gauze. They strung him up on wires hooked to the ceiling and left. By the time mama arrived that night, I was upset.

“He stinks,” I whined. “You hush,” she hissed. “Be ashamed of yourself. He's practically burnt to a crisp.”

The next morning, He was dead. I wondered what might be in store for me.

From then on, I took a dim view of things and bent myself towards self-sufficiency. An old neighbor lady, however, saw things differently.

“You so stubborn because they messed up and gave you goat’s blood when you got that transfusion," she explained. "Plus, you ask too many questions.”

My mother encouraged those questions and helped guide me to the answers. Along the way, she continuously pressed me to think for myself, behavior she called "standing on your own two feet."

Most of the other Black adults who had a hand in shaping me, especially my English teachers and my high school guidance counselor, reinforced my home training. Their message was clear: “You are smart, tough, and destined to help change the world.”

I believed all of them even though when they were brain-scrubbing me, I was Negro, female, growing up in an increasingly run-down public housing project, and attending segregated public schools in Charlotte, NC.

Then, at 18, I went away to college in Wisconsin. There I began a life surrounded by white folks who had never seen black folks in person. I am still recovering.

Skeptical optimism and being unafraid of confrontation have fueled my successes as a lawyer, manager, business owner, community activist, and advocate.

I have integrated—by race, gender, class, and attitude—one college, three law schools, several towns, and a host of other public and private institutions, workplaces, and neighborhoods. I drive a stick shift and once upon a time played first chair violin.

Decades after I first put pencil to paper, I spent a month in residence at The MacDowell Colony where I was named the DeWitt Wallace/Readers Digest Fellow for 1997-98.

I have been a writer all my life. Now I just get to do it full-time. 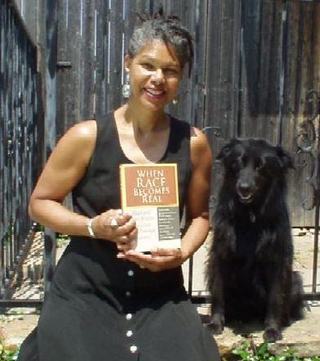 The writer, her book, and Gracie

The Council Chronicle May 2002

© 2002 National Council of Teachers of English

After her mother, Bernestine Singley credits English teachers with imparting the greatest influence on her life. "They were the ones who really pumped me up and kept me going," she says.

She fondly remembers winning an award from NCTE for an essay she wrote many years ago and wants English teachers to know: "Just remember that there are kids being impacted by you everywhere and you have no idea where they are going to end up. They could go from the projects to being authors."

The Path She Traveled
That is roughly her story. Born in 1949, Singley, who is African American, grew up in public housing in Charlotte, North Carolina, and attended racially-segregated public schools. She remembers that the transition from West Charlotte Senior High School to Lawrence University in Appleton, Wisconsin, was "like going from Mississippi to Siberia."

She says there were fewer than 20 African American students on the campus of 1,300 and no African American adults in the surrounding towns. She recalls the experience as "stripping," but also says it was a galvanizing challenge.

She credits her speaking and writing skills with seeing her through college and leading her to become a lawyer after she went on to graduate from the University of Florida and Harvard University law schools.

A Little Nudge
Although she has written all her life, Singley says it took prompting from her mentor and friend Derrick Bell, the first African American law professor at Harvard University, for her to consider publishing. (Bell wrote the epilogue for When Race Becomes Real.)

Following up on Bell's suggestion, Singley applied to and was accepted in the "emerging artist" category at the MacDowell Colony in Peterborough, New Hampshire. In short order, one of her stories, "White Friends," was accepted for publication in Children of the Dream: Our Own Stories of Growing Up Black in America, and she has seen about a half dozen of her other works published.

When Race Becomes Real has been many years in the making, Singley says. It grew from her asking African Americans and whites "who have shown that they have the chops to write about race" to tell their personal stories about race.

The Task
Believing that it's too easy for people to lecture or blame others about issues related to race, Singley invited the contributors to write "a story that is your story so that when people read it they will get a sense of what race means to you at the end of the twentieth century."

To assemble the 30 contributors--10 African American females, 7 white females, 7 African American males, and 6 white males--she recruited from among professionals whose work has influenced her. She also searched books, articles, and the Internet, and solicited suggestions from others.

She ended up with a range that includes best-selling and award-winning writers, such as Robert Coles, Beverly Daniel Tatum, Natalie Angier, Patricia J. Williams, David Bradley, Lisa Dodson, Leonard Pitts, and Jim Schutze, as well as a 12-year-old, a mother-daughter team writing together, and a father and daughter each sharing a view.

Who Should Read This Book?
Naturally, Singley wants everyone to read the book, and says she especially hopes it will find its way into the hands of high school and college students, who she fears might view the history of civil rights struggles as "olden day" stories, or who might too easily accept a belief that "race makes no difference."

To the latter, Singley responds: "Race should make no difference, but the fact of the matter is, because of our history, race makes all the difference in the world. In order to understand it, I think these personal stories create an opportunity for younger people to experience history in a way they wouldn't from reading it in the pages of a history book."

She hopes the book's storytelling approach invites a continuing conversation about race, an often difficult topic for honest discussion. "If you're telling your story, who can argue with that? My response is, 'If you don't like my story, then you need to tell me one.'"

"This collection really is about opportunity, possibilities, and transcendence," Singley says, likening the stories to "windows going up," inviting us to a changed worldview.

This article originally appeared in The Council Chronicle, Vol. 1, No. 4, May 2002, p. 4, a publication of the National Council of Teachers of English. Reprinted with permission.

Using her award-winning book as a platform, Singley takes insights specific to your venue and weaves them into a provocative, thoughtful, and often humorous race conversation with your audience.

Refreshing and engaging, Singley storms the stage with a simple message: “In a diverse world where race is still the issue, being real is still the answer."

A native of Charlotte, NC, Singley is a Harvard Law School (LL.M.) and University of Florida College of Law (J.D.) graduate. She practiced law for nearly fifteen years, during which time she was Assistant Attorney General first in Boston (Civil Rights) and later in Dallas (Consumer Protection).

Singley left law in the late 80s to run one of the nation’s top design engineering firms. After overseeing the team that provided the structural design for the new Chicago White Sox stadium (U. S. Cellular Field), in 1990, she started her own firm, STRAIGHTALK.

STRAIGHTALK has advised private and public sector CEOs and their management teams across the US and abroad.

Teachers Who Changed My Life in the Charlotte-Mecklenburg County, NC School District

Best of the Best

In 1964, MS. ILDA S. JOHNSON (now Green), my 9th grade English teacher, presented me with a medal from the National Council of Teachers of English (NCTE) for my winning essay. It was her idea that I enter the contest and since she was my best and all-time favorite teacher, her wish was my command.

In Peggy Harris' book review to your left, see how the NCTE came through again nearly 40 years later...proving that ENGLISH TEACHERS STILL ROCK!