"The Old Wink and Nod"

My two best friends from college have joined me in northern New Mexico in the fall of 2000 for our once-a-decade reunion.

Lounging in our hotel suite, we trade verbal snapshots, punctuated with raucous spikes of laughter, just as we did more than 30 years ago. When it is my turn, I’m still smarting from my flight from Dallas-Forth Worth International, where airport security has newly chafed me raw. Almost immediately, I nosedive into a rant about relentless, humiliating airport surveillance.

My friends become a pair of puzzled faces. “You don’t even know what I’m talking about, do you?” It is more an accusation than a question. Their silent nods stoke my fury.

So, I break it down for them: 100 percent of the time I fly out of DFW, a security agent pulls me aside, removes my carry-on bags, searches them and me, then hooks up my bags to a monitor and chemically analyzes them to ensure I don’t board the plane with illegal drugs or bombs. This is all done in full public view.

Nothing I do changes the pattern: not my poker face nor my basic black designer dress, tasteful jewelry, hosiery and pumps; not my hair pulled back off my face instead of spiraling freely in a nappy halo around my head the way I wear it otherwise.

“Why always me?” I ask the security agents. “Random search,” they mutter. “One hundred percent defies probability,” I shoot back.

I a am lawyer, writer, and business owner. A wife of nearly 20 years; a suburb dweller past age 50.

“What threat profile do I fit?” I ask my two friends, who look slightly stricken, almost as though they might be responsible for those plastic-gloved people who plow through my bags.

They have no answer, but three years later, Katheryn Russell-Brown does and she shares it in .

As for the threat profile I fit? I am traveling while black.

My two college friends are white, which explains why they were clueless. Apparently, though, other Black women knew what I knew.

Ninety-five percent of the passengers who were stopped were frisked; four percent were strip-searched; and one percent was subjected to an x-ray screening.

“Black women were more likely than any other group—including black men—to be profiled as drug couriers and searched,” says Russell-Brown.

Black women unfortunate enough to be US citizens were treated even worse: Despite being less than half as likely to be carrying contraband as White women, Black women were nine times more likely than White women to be x-rayed following a frisk.

Back when I was being harassed for being a Black American traveler, I had never heard of a Black woman who had hijacked a plane, made or exploded bombs, or smuggled tons of drugs into the US. I still haven’t.

I was being harassed for traveling while Black long before the September 11, 2001, terrorist attacks on the World Trade Center and the Pentagon.

While other Black women and I were being targeted, men who escaped detection got away with murder. If security forces had been paying less attention to us, might they have detected the real threat instead of the one they simply imagined?

There are nearly 7 million Americans under the supervision of the criminal justice system. Of those, African Americans and other people of color are arrested, convicted, and imprisoned in numbers shamefully disproportionate to their presence in the population.

For decades, social science researchers, criminal justice workers, political pundits, and opportunists of every ilk have tripped over—and tripped up—each other in their rush to explain why that is. Too often, the dominant discourse has fallen back on a tired refrain: There are more blacks in prison because more blacks are criminals. The coded message? Blacks and crime are inextricably and justifiably linked. But the facts prove something different.

Most Americans should fear the person who looks most like them, because 84 percent of violent crimes are same-race offenses. The exception is Native Americans: An estimated 60 percent of the people who violently assault Native people are white.

There is a reason we believe what we do despite the facts. Conventional wisdom, the wink-and-nod that paints crime with a black face, is constantly reinforced by the way research projects are designed, the choice of data collected, and how the results are interpreted and publicized.

Fortunately, Russell-Brown is not confused. And now that she has cracked the codes for us, we don’t have to be either.

What is underground is invisible; and coded messages suggest one thing, but mean something else entirely. Together, Russell Brown argues, “underground codes” overlook, misinterpret, or falsely link critical information about race and crime.

Statistically speaking, when it comes to research on the criminal justice system, all the blacks are men, all the women are white, and black women don’t count.

This is so despite the current reality, in which black women are coming under control of the justice system at an astronomical rate: one that is six times greater than for white women; that increased 78 percent in five years; and that is growing faster than for any other race and gender group.

Russell-Brown sounds the alarm. Ignoring black female criminality and victimization, she says, sends a message that it is acceptable for information about African American women to remain buried, thereby keeping them invisible.

There are consequences—legally, politically, socially, morally—to the deluge of black female prisoners. Many incarcerated women were sandwiched between children and elders as sole caregivers and providers. Yet just try finding research on that.

“Standard” measures of bias are typically limited to “formal” stages of the criminal justice system: arrest, prosecutor’s charge, bail setting, jury selection, conviction, and sentencing. Russell-Brown argues that this kind of data collection begins too late, ends too soon, and ignores critical phases of criminal processing by labeling them “informal.” It shuts out all but a fraction of the inputs for racial bias.

Instead, Russell-Brown advocates for “a fully realized typology.” Her approach is so logical that it is difficult to fathom why it is not already the prevailing research methodology.

To get a more accurate view, she instructs, widen the lens. Begin data collection prior to arrest, including a person’s first contact with an agent of the criminal justice system (a traffic stop, for instance), and continue it through to final contact, such as parole.

Along the way, examine the behavior, language, and racial identities not only of victims and offenders, but also of witnesses, police, prosecutors, defense attorneys, bailiffs, judges, clerks, jurors.

To see how race influences decisions at each step, observe the interactions of all of these actors with each other as well as with victims and offenders.

Anything less, contends Russell-Brown, makes it impossible to discern the full impact of race, thereby erroneously reinforcing the belief that racial bias is not present.

This is especially true for the justice system’s back regions—the invisible “petit apartheid” substrata where racist stereotypes dominate and minor functionaries reign with total discretion. This is the “informal” part mainstream researchers minimize, choosing to overlook what is arguably a mother lode of racial bias.

The professor is talking research revolution. The quiet but explosive power of her approach emerges clearly in her dissection of the research on “gangsta rap.”

Remember all those studies and high profile criminal cases that proved listening to “gangsta rap” led to criminal behavior? If so, you remember wrong. They did no such thing.

Instead, what began as “a legitimate question about the ethical value of gangsta rap” quickly morphed into an explicit statement purporting to prove something it did not. Research on rap and criminality is so sparse that Russell-Brown is able to methodically and efficiently unearth the facts, study by study, in only ten pages.

Then, this lawyer, professor, and criminologist corrects the record: “The research simply does not support a direct link between listening to gangsta rap music and involvement in crime.” What it does show, however, is insidious.

A 1996 study used 200 randomly selected whites to explore whether it is rap music lyrics that cause a negative reaction or whether it is the artists’ race that explains people’s negative perceptions of the music.

For the first part of the study, participants were given song lyrics about a young man who searches for and kills a police officer. One group was told the song lyrics were rap, another that it was a country song, and a third group that it was folk music. Then they were asked to evaluate the lyrics for their degree of offensiveness, danger to society, and likelihood of causing a riot. They were also asked whether such lyrics should be regulated.

For the second part of the study, in addition to lyrics, participants were shown a picture of the artist. One group was shown a black man and the other a white man, both of them with short hair and dressed in a sport coat over a T-shirt.

“The same lyrical passage,…acceptable as a country song or when associated with a white artist, [became] a dangerous, offensive song [needing] governmental regulation when it [was] a rap song or associated with a Black artist,” concluded the study’s author. (My italics.)

We might be a nation of illiterates where race and crime are concerned, but this doesn’t have to be our permanent condition.

For the uninitiated, Underground Codes offers 20 “Race Facts,” an eight-page primer to help boost the racial IQ. For professionals—researchers, criminologists, and academicians—it outlines the specific theoretical and empirical foundations informed conversations about race and crime require.

One hundred fifty years after hundreds of slaves followed Harriet Tubman’s Underground Railroad to freedom, Russell-Brown proposes freedom of a different kind: a mindset shaken loose from the shackles binding race to crime.

Accessible in style and comprehensive in scope, Underground Codes maps a well-signed route to the places where truth lies, where it never existed, and where much more is still desperately needed.


This review, with minor revisions here, appeared in the June 2004 issue of Women's Review of Books (Wellesley College Center for Research on Women). 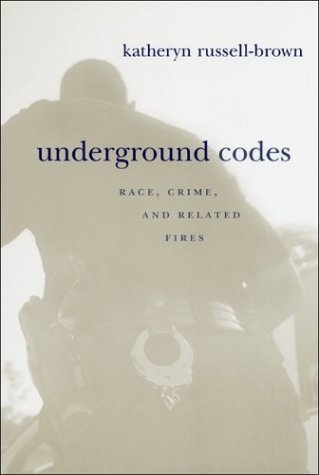 Purchase UNDERGROUND CODES: Race, Crime, and Related Fires, the subject of my book review in the column to the right.
Loading…}