I am awake in the middle of the night, sleep broken, exhausted from despair. Yesterday I was rage. In the wee hours, I am sorrow. Mama is dead. White folks are still ripping us apart.

On the eve of fifty, coiled like a fetus, I take cover beneath a fortress of down and flannel, wailing. My terror is no longer nameless and free-floating. It is clear and present, a headless, one-armed carcass bleeding down the wall, sheets of skin sheared away from flesh.
James Byrd, Jr. My sanity teeters, but he doesn’t have to worry. A truck lynching has seen to that.

A bullet in Memphis, church girls in Birmingham, Tom on the bench, a jury beatdown in Simi Valley. Roped like a steer, chained to a truck, riddled with history, I am decimated by collective amnesia, drowning in race dialogue, daily dismembered by business as usual.

Where are all the guns when you need just one?

At 8:30AM, I leave home, not because I want to, but because I have to. On my own, I would cuddle up to the carcass in the corner and, with all deliberate speed, keep going crazy. But a grown woman has responsibilities, so I get in the car. I arrive at school fifteen minutes late for my date with Cameron.

Three mornings each week, he is here, usually eager, increasingly able. While he feeds the last bit of his pencil to the pencil sharpener, I shift in my tiny chair and breathe in Mrs. Wallace’s* second grade Dallas, Texas classroom. Words and pictures cover the walls. Centuries of chalk dust float sideways through the air. Books comfort and reassure. Many years gone, I am back where I started, where everyone is black like me. We are safe.

A born artist, Cameron is a child of painstaking sensibilities. Only eight, he already has well-developed preferences and articulates them clearly: He will read for art. He wants candy, but I bring him fruit regardless, sometimes roasted peanuts in the shell. His favorite treat is imported peppermints, the chalky kind that sting his tongue.

A revolutionary lineup, really, for one so small, so brown, so fragile. How long would he last, tied to the back of a pickup truck and dragged—bump, bump, bumpity bump—two miles down a country road?

We are two-thirds of the way through his spelling test when Cameron sprawls across his desk with a serious case of the blues. We’ve hit a new word and since I have forbidden him to write each letter in perforation with the speed of molasses, he needs a new stalling technique.

Suddenly, he leans back in his chair and, with his eyes closed, says, “I think you are an old lady.” He opens his eyes to see how he’s doing.

“And I think,” he continues, studying my face and ignoring half of my instructions, “that you will be very old in two days.” Now he looks genuinely concerned.

I am stunned at his prescience. Since he has not yet learned the importance of lying to a woman about her looks, I know he’s telling the truth. The grief that left home in my belly has crept up to my face. My throat won’t work. Tears I should be swallowing squirt out of other tight places.

Cameron,” I say evenly, “we’re all getting older everyday. That’s how life works. Anyway, don’t be rude. Just spell the word. Jamaica.”
Sniffing a small victory, he eyes me a bit longer. Then he smiles and turning back to his sheet of paper intones as he writes without hesitation, “Capital J-a-m-a-i-c-a. Jamaica!”

Prodding him with peppermints, we go well past one hour. He doesn’t even notice that we have skipped drawing. After an hour and a half, though, he is squirming, wriggling, wiping his eyes. Finally he puts his head down on the desk and pretends to be asleep. I get the message and call it quits for the day. But I dare him to spell Jamaica one more time to convince me it wasn’t a trick.

He’s mildly indignant at first, but then spells it fast with confidence. He ends with a flourish, both arms stretched, TV game-show style, above his head.

Even after he goes back to his regular seat at the front of the classroom, I linger in our corner in the back, rearranging the contents of my bag, fumbling for my car keys, smelling books and chalk, safe and protected.
I review the vocabulary words Cameron has mastered for the day.

But a grown woman has responsibilities and I can’t hide in this back corner of Mrs. Wallace’s second grade classroom all day.
Inside my car is warm from the bright morning sun, but when I shift into first gear and pull away from the curb, sorrow descends and I am drowning again.

© 2000 by Bernestine Singley. No reproduction in any medium without specific written permission.

Road to a healing...Jasper, TX and back 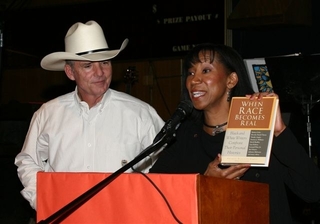 I have never met Sheriff Billy Rowles though I expect I will some day. When I do, I'm sure it will be my indomitable friend Joyce King, a fearless investigative reporter, who will introduce us because she loves the sheriff and the people of Jasper. To fully understand, you'll have to read her book, HATE CRIME: The Story of a Dragging in Jasper, Texas.

A sea of reporters from all over the world traipsed through Jasper as James Byrd's murderers were tried, but King was the only one who covered all three trials. Obviously, she's a black woman like me. What's not obvious is she was born and raised in the US south like me. And, like me, King has lived and worked most of her life in the South. Which is why no one else could've written her riveting account of the explosive event that shocked us into the 21st century.

As King says,"My friends like to say I’ve walked in 'tall cotton' since becoming an author, but I am still the same little Southern girl. If anything, Jasper made a good person better in both heart and soul."

Even though Joyce and I had lived and worked in the same city for years and years, we never met until our books--both born of Byrd's murder in 1998--were published. Inexorably drawn to the minefield of race, our meeting was inevitable.

When Joyce delivered WHEN RACE BECOMES REAL to Billy Rowles in 2004, she helped close the circle on my Jasper, TX healing.

That's the story behind this picture.